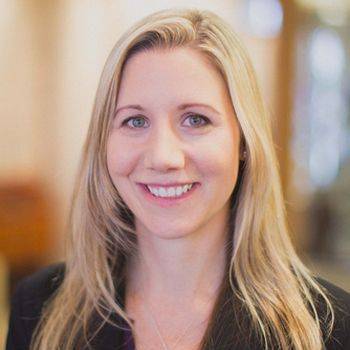 Dr. Dillon graduated on the Dean’s Honours list from the Doctor of Optometry program at the University of Waterloo in 2006. During her final year she completed an internship at a leading eye disease referral centre in Alabama. During her studies, she had extensive exposure to many ocular diseases as well as pre and post surgical care for LASIK and cataract surgery.

Dr. Dillon was born and raised in Winnipeg. She began her University career at the University of Winnipeg in 1999 where she completed her undergraduate requirements as a student of highest distinction.

After completing her optometry studies in Waterloo, Ontario, Dr. Dillon was excited to return to Winnipeg with her husband where she joined Drs. Georgi and Murray at Village Optical in 2006. She enjoys being able to provide comprehensive care for the entire family in a friendly environment.

Dr. Dillon is the past President of the Manitoba Association of Optometrists (MAO). She has been an elected member of the MAO council since 2012 and has served on and chaired multiple committees.

When she is not busy sharing her passion for eye care, she spends her spare time with her family and two young boys. You may find her cheering them on at the hockey rink at Dakota Community Centre.  She also enjoys running and you can typically see her running the half marathon at the Manitoba Marathon.

Dr. Dillon is known for providing thorough, compassionate care in a fun and relaxing environment, especially for her youngest patients.

She looks forward to continuing to build relationships with current patients and meeting new patients.